CPS Cymru-Wales is currently maintaining core business functions, while doing all we can to minimise in-person contact.

Our main contact number is 02920 803800 with options for the various units. Contact numbers for specific offices can be found in the Contact Us section at the bottom of this page. Please note that our offices will not be staffed as usual.

For cases in North Wales, Abertystwyth and Llandrindod Wells:

For cases in South East Wales:

For cases in South West Wales:

The Crown Prosecution Service (CPS) is the main prosecuting authority in England and Wales. We work in partnership with all agencies in the criminal justice system, especially closely with the police, although we are independent of them. The police will investigate crime and our role is to prepare and present cases to the courts. 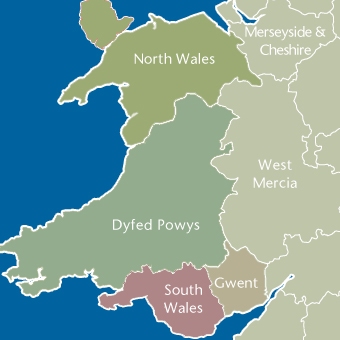 The CPS has 14 Areas across England and Wales. CPS Cymru-Wales is our Area. The CPS in Wales serves a population of over three million people and our local teams work alongside partner organisations in the four police force areas in Wales: Dyfed Powys, Gwent, North Wales and South Wales.

CPS Cymru-Wales employs around 280 members of staff, consisting of lawyers, paralegals and administrator.  We work remotely across a wide range of locations in Wales but our three main offices are in Cardiff, Mold and Swansea.

We are committed to providing a high quality service in the Welsh or English language, on an equal basis.

The CCP is supported by a team of senior managers with expertise in legal and business management issues. On the legal side, support is provided by Deputy Chief Crown Prosecutors Deborah Rogers and Huw Rogers. Mike Grist is the Area Business Manager and has responsibility for the business and operational delivery functions. 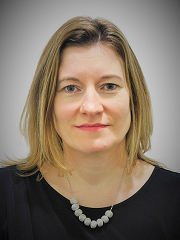 Jenny grew up in Wales and was a solicitor in private practice before joining CPS London in 1998 as a Senior Crown Prosecutor.  She became a Legal Manager in CPS London before spending 5 years as a Unit Head in the Organised Crime Division.  She returned to CPS London as the Head of Homicide and in 2011 was appointed the Deputy Chief Crown Prosecutor with responsibility for the Complex Casework Unit.

Deborah was called to the Bar in 1983. She started her career as a Magistrates' Court Clerk in Bradford and Manchester.

Deborah joined the CPS in 1986 and was based in London before joining CPS South Wales. With over 25 years’ experience as a Senior Crown Prosecutor, Deborah has been Head of the Rape and Serious Sexual Offence (RASSO) unit and also the Crown Court Unit in Cardiff.

She is the violence against women and girls (VAWG) coordinator for Wales and was appointed to the post of Deputy Chief Crown Prosecutor in March 2013.  Her Deputy CCP role is in respect of the Crown Court casework conducted in CPS Cymru-Wales.

Huw joined the CPS in 2004 after several years in private practice where he was head of the firm’s criminal department.  He has been Head of Complex Casework and RASSO in CPS South West before he joined CPS Wales in 2018.

An experienced Business Manager, Mike has been with the CPS since its inception in 1986.

In 1991 he took up post of Chief Law Clerk for Wiltshire and Gloucestershire CPS. In 1993 he moved to Wales to take up an Operations post and in 1996 he was appointed as Area Administrator for Wales.

In 1999 Mike was appointed as Area Business Manager for CPS West Midlands and after eight years’ service returned to Cardiff to take up a similar post for CPS South Wales.

The Magistrates’ Court Unit prosecutes a wide range of offences where the maximum sentence for each offence does not exceed six months' imprisonment or one year if two or more relevant offences are to be considered. All cases commence in the magistrates’ court.

The Crown Court Unit deals with more serious cases and those likely to receive higher penalties. Our Crown Court Unit includes teams who deal with complex casework and rape and serious sexual offences.

Wales is a vibrant and diverse country with a unique identity.

The Crown Prosecution Service (CPS) in Wales is committed to engaging with local communities in order to improve our services and we want to provide a fair service for everyone. It is important that people understand how the criminal justice system works and how we come to our decisions.  All too often, people do not know who we are or understand what we do. The CPS in Wales is committed to changing this and having a visible presence. Across Wales, we aim to work with all groups and communities to ensure that new policies adopted by the CPS reflect the diverse society we live in and that our operations are informed by the needs of the communities we serve. There are a number of ways in which we seek to involve local communities in the way we plan and deliver our services.

There are three LSIPs. One covering South Wales and Gwent police force area; one for North Wales police and one for Dyfed Powys police. The Panels aim to:

We are committed to dealing with Victims and Witnesses with respect. We understand being a victim or witness of crime can be difficult and how vulnerable some people may feel. We will support them through the process so that they can give their best evidence at court.

We prosecute cases on behalf of all our communities and want communities to continue to have confidence in their local justice system, to believe their interests are fairly represented and that justice is seen to be done.

We will provide an equal service in the Welsh or English language.

Cymru-Wales contact point for Victims' Right to Review enquiries:
Email: VictimLiaison.Cymru-Wales@cps.gov.uk
Telephone (FOR VRR ENQUIRIES ONLY - do not use this number to contact the CPS's Cardiff office - see below): 02920 803966

If you have a cjsm.net email account, please use the following:

For cases in Swansea Courts: SWestWalesCPS@cps.gov.uk.cjsm.net

For cases being dealt with by the Rape and Serious Sexual Offences Unit: CymruWalesRASSO@cps.gov.uk.cjsm.net

For cases in Swansea Courts: SWestWalesCPS@cps.gov.uk

For cases being dealt with by the Rape and Serious Sexual Offences Unit: CymruWalesRASSO@cps.gov.uk

Please email wales.communications@cps.gov.uk if you would like more information about the work of the CPS in Wales, but please note:

Man sentenced for attempting to rape woman and daughter

05 October 2021
Sexual offences
@cpsuk
⚖️ Two men have been imprisoned for their part in defrauding millions of pounds from over 100 victims. Read more… https://t.co/pwqQ9aDCZQ
RT @CPS_NorthWest: ⚖️Andrew Cairns guilty of causing death of 11yr old Ruby Cropper in Aug 2020 in Radcliffe. After he collided with her, h…
We have published the latest round-up of quarterly statistics on prosecutions. This Q2 data release covers the 3-m… https://t.co/chWD9Pdxb3
RT @CPS_Mersey: A teenager has been found guilty of murdering a man with a "Rambo"-style knife in an incident in Cheshire. The youth, who c…
⚖️ A man from #Wales who pretended to be a lawyer and doctor to control his partner has been sentenced. We take al… https://t.co/P0oHoOwTfn
Navigate to tweet 0Navigate to tweet 1Navigate to tweet 2Navigate to tweet 3Navigate to tweet 4
Scroll to top
Close