How and when to request a review

The type of qualifying decision being reviewed and the original decision maker will determine the correct review pathway. 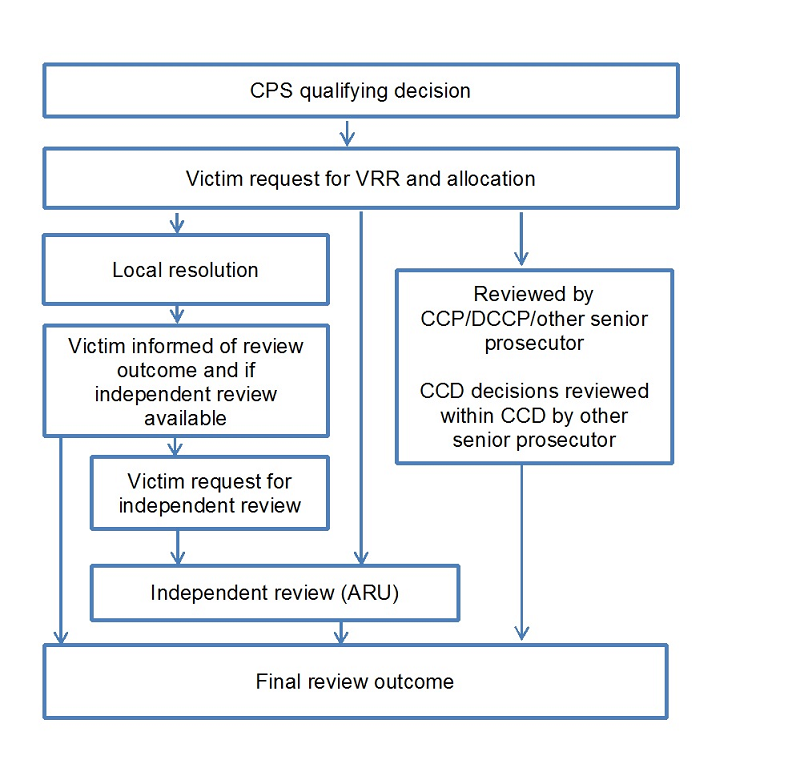 A broad summary of related VRR timeframes can be found below. Please refer to paragraphs 30-32 for more information.

In all cases where it is not possible to provide a VRR decision within the usual timeframes, for example in more complex cases, the CPS will notify the victim accordingly. Regular updates will be provided as to the progress of the review, although these will not be more frequent than every 20 working days thereafter, until a final decision is made.

PDF versions of the guidance contained on this page can be downloaded below, available in English and Welsh.

The Code for Crown Prosecutors

This guidance assists our prosecutors when they are making decisions about cases. It is regularly updated to reflect changes in law and practice.

Continue reading Victims' Right to Review data
Close footnote
@cpsuk
Baljit Ubhey, Director of Strategy and Policy, is attending a virtual briefing about pre-trial therapy hosted by… https://t.co/hd5BajsMYR
COLLARED: How did a French Bulldog help bring down a drug smuggling group? 🐶 Photos of Bob the dog on a defendant’… https://t.co/ZRTHfjlYB5
The CPS London South team have been supporting 16 Days of Activism, a global campaign which aims to end gender-base… https://t.co/15P27AlNrL
How should the CPS work with children who experience domestic abuse? Kate Brown, national CPS domestic abuse lead,… https://t.co/mxLnvCVIN7
If someone is seen to have 'dishonoured' their family or community, they could be subject to abuse. 👆 Hear more fr… https://t.co/cVFSmPCpJ8
Navigate to tweet 0Navigate to tweet 1Navigate to tweet 2Navigate to tweet 3Navigate to tweet 4
Scroll to top
Close