Someone can be a victim of more than one type of hate crime.

These crimes are covered by legislation (Crime and Disorder Act 1998 and section 66 of the Sentencing Act 2020) which allows prosecutors to apply for an uplift in sentence for those convicted of a hate crime.

The police and the CPS have agreed the following definition for identifying and flagging hate crimes:

There is no legal definition of hostility so we use the everyday understanding of the word which includes ill-will, spite, contempt, prejudice, unfriendliness, antagonism, resentment and dislike.

What’s the role of the CPS in prosecuting hate crime?

The police investigate and obtain evidence to show a crime has been committed.

The CPS is responsible for deciding which cases go to court. This includes taking a decision on whether there is enough evidence to prosecute a crime as a hate crime.

If an offender pleads not guilty the CPS are responsible for preparing and presenting the case against them at court.

In hate crime cases the CPS is also responsible for asking the courts to increase the sentence that an offender receives – to reflect the fact that the crime they committed was a hate crime.

How are we tackling hate crime and what impact are we having?

At the CPS we recognise how important it is to effectively prosecute hate crimes. Here are some of the things we’re doing to achieve this:

What impact is this having? 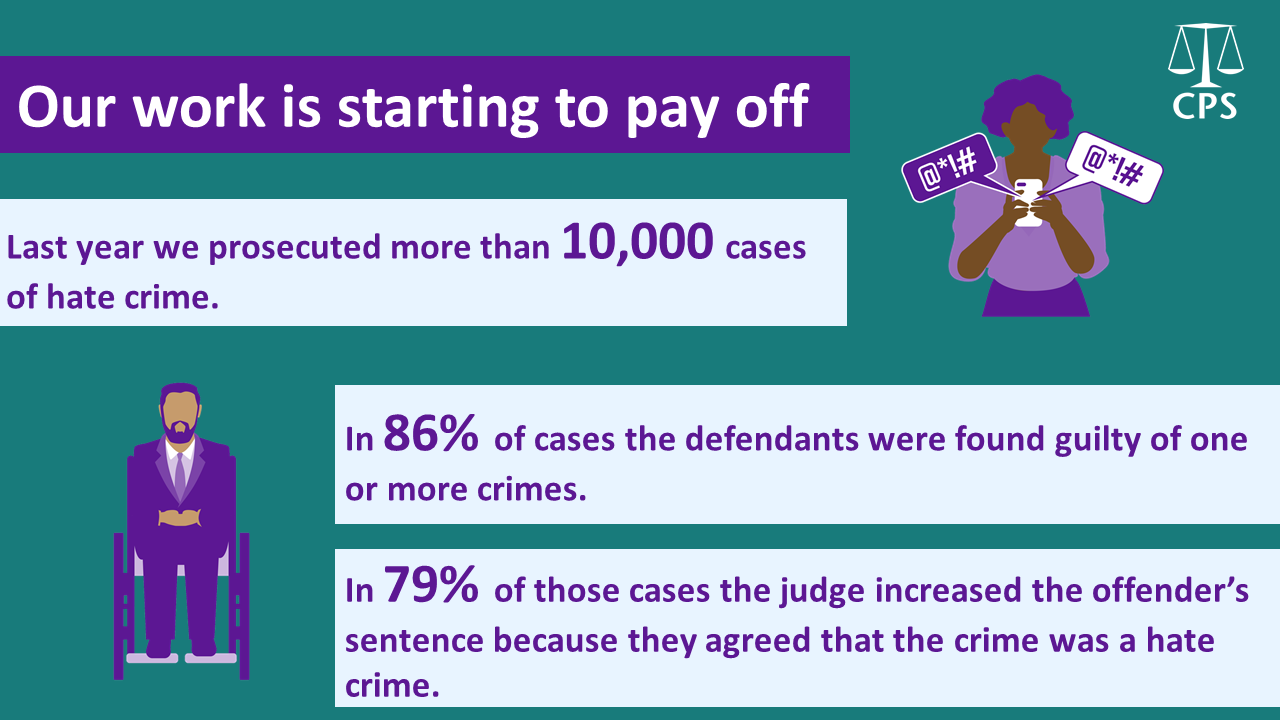 Find the quarterly summary you're interested in and select 'Hate Crime' in the index.

Our public policy statements explain the way we deal with and prosecute hate crimes and what victims and witnesses can expect from us.

How to report hate crime

If you or someone else is in immediate danger, call 999.

If it isn’t an emergency, you can report hate crime by calling the police on 101 or by filling in an online form at report-it.org.uk

Here you will find the latest news and information on hate crime across England and Wales.

Support for victims and witnesses

There is a wide range of organisations who support victims and witnesses of hate crime. You can find out more about some of these organisations on their websites.

Some charities can also support you to report hate crime:

Find out more about the hate crime ECG

Further information for victims and witnesses

Hate crime
@cpsuk
⚖️ A fraudster who used Grindr to meet men for casual sex before robbing and blackmailing them for money has been j… https://t.co/zurB9v3Bys
⚖️ Two men have been imprisoned for their part in defrauding millions of pounds from over 100 victims. Read more… https://t.co/pwqQ9aDCZQ
RT @CPS_NorthWest: ⚖️Andrew Cairns guilty of causing death of 11yr old Ruby Cropper in Aug 2020 in Radcliffe. After he collided with her, h…
We have published the latest round-up of quarterly statistics on prosecutions. This Q2 data release covers the 3-m… https://t.co/chWD9Pdxb3
RT @CPS_Mersey: A teenager has been found guilty of murdering a man with a "Rambo"-style knife in an incident in Cheshire. The youth, who c…
Navigate to tweet 0Navigate to tweet 1Navigate to tweet 2Navigate to tweet 3Navigate to tweet 4
Scroll to top
Close