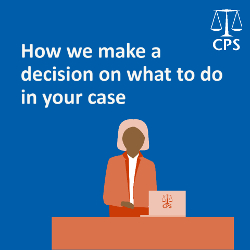 Once the police consider that they have enough evidence they will pass the case to us at the CPS.

For less serious offences, for example shoplifting, the police will already have decided to charge the suspect before they send the case to us.

In these cases we’ll review the evidence to check that we agree with the police’s decision before we go ahead with a prosecution. If we decide there isn’t enough evidence to prosecute we’ll let you know the reason for our decision. You can read more about this and your right to review in our section on making our decisions.

For more serious offences, for example hate crime, domestic abuse or any offences which carry a sentence of more than six months in prison, we will review the evidence the police have collected and decide whether or not we can prosecute the suspect.

This section explains what happens when the police send the case to us including how we make our decision on what to do in each case, what will happen next if we decide to charge a suspect and what your rights are if we decide not to charge them.

The file that the police send to us will contain a range of evidence. This includes things like:

The police file will also contain a list of all the relevant material they’ve gathered as part of their investigation that doesn’t form part of their evidence against the suspect. The police will tell the CPS prosecutor if any of this material could undermine the case or help the defence case if the case went to trial.

The officer in your case will be able to explain to you what offences the suspect might be charged with in your case. You can find more detail on specific offences on the legal guidance page of our website.

To decide whether or not to charge the suspect in a case our prosecutors apply the two-stage test set out in our Code for Crown Prosecutors.

The first stage is the ‘evidential stage’. At this stage, our prosecutor reviews all the evidence provided by the police and asks themself the question ‘Is there enough evidence against the suspect to provide a realistic prospect of conviction?’ That means, having heard the evidence, is a court more likely than not to find the defendant guilty?

To answer this question they must consider whether the evidence they can use in court is reliable and credible and whether there is any other material that might undermine that evidence.

The second stage is the ‘public interest test’. At this stage, the CPS prosecutor again reviews all the evidence provided by the police and asks themselves the question ‘Is it in the public interest to prosecute?’.

To answer this question, they must consider things like the seriousness of the offence, the harm caused to the victim, the impact on communities and the age and maturity of the suspect at the time of the offence.

You can read more about our two-stage test in our Code for Crown Prosecutors.

Every case is different and there is no single answer to this question. Some cases may be straightforward while others will have a lot of evidence that we need to review or legal issues we need to resolve.

We know how difficult it can be while you’re waiting for this decision so will always do our best to review the evidence quickly and efficiently so that you aren’t waiting longer than is needed. You have the right under the Victims' Code to be provided with information about the investigation and prosecution so if you have any questions about the progress of your case you can get in touch with your police contact and they’ll be happy to help.

If our prosecutor decides that our two-stage test has been met, we will tell the police what offence(s) they can charge the suspect with.

The police will then charge the suspect. At this point the suspect becomes known as the defendant.

In some cases, for example, if the police believe there is a risk the defendant might commit another offence or fail to attend court, the defendant may be ‘remanded in custody’. This means they will be held by the police, usually in a police cell, until they have appeared before a judge or magistrate when they may request to be bailed.

The next step is the first hearing of the case which takes place in the magistrates’ court.

If the police find more evidence, the case can then come back to us and we will make a new decision on whether or not to prosecute the suspect.

The police will keep you up to date with what’s happening in the case if they need to look for more evidence.

If our prosecutor decides the case doesn’t pass our two-stage test, and there is no further evidence that the police could look for that would change this, they can't charge the suspect. This is also called a decision to advise ‘no further action’ (NFA).

If we decide not to prosecute the case we will explain the reasons why - usually it will be your police contact who explains this decision to you, but in some types of cases our prosecutor will send you a letter.

If you are unhappy with the decision you have the right to ask us to look at our decision again. This is called the ‘Victims’ Right to Review’.

There is no formal process that you need to follow to request a review of your case - all you need to do is let us know that you would like us to look at our decision again.

If you’d like to request a review you should do this as soon as possible after we have let you know about our decision not to charge your case and ideally no later than 10 working days (two weeks) later. We can only accept requests made more than three months after the decision in exceptional circumstances - for example if you weren’t told at the time about your right to review.

If you request a review a new prosecutor from within the CPS Area will review all the evidence and apply our two-stage test again to come to their own decision in the case. They may decide that the legal test is met and the suspect can be charged or they may agree with the decision that there should be no further action.

Once they’ve completed this review, they will write to you to explain their decision. They will also offer to speak to you over the phone or in person to discuss the case if you would find that helpful.  If you’ve provided any additional information alongside your request for a review - for example, information about why you think the decision is wrong - then the prosecutor will address any points you have raised in their explanation.

If you are not happy with the decision of the new prosecutor then you can request a further review of the case. This will be carried out by our Appeals and Review Unit. They will review of the evidence and apply our two-stage test to come to their own decision in the case. They’ll write to you to explain their decision.

You can find out more on our Victims’ Right to Review page. 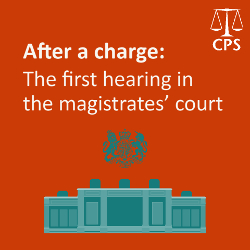