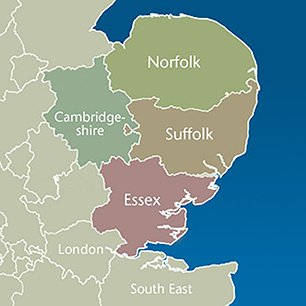 The CPS has 14 Areas across England and Wales. CPS East of England consists of the counties of Cambridgeshire, Essex, Norfolk and Suffolk.

We currently employ 290 members of staff which consists of lawyers, paralegals and administrators. The majority of our staff are based in our headquarters in Chelmsford; we also have staff based in Norwich at Carmelite House and in Ipswich at the Crown Court. 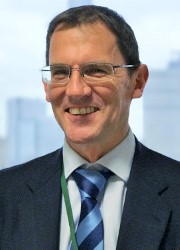 Frank Ferguson took up the role of Chief Crown Prosecutor for CPS East of England in May 2021.

Frank, a barrister, joined the CPS in 1992 as a legal trainee in the Hertfordshire and Bedfordshire Area. He then became a Higher Courts Advocate and Unit Head in Norwich, before moving to CPS Direct between 2004 and 2006 as a legal manager.

Prior to rejoining CPS East of England, Frank was Deputy Head in the Specialist Fraud Division with responsibility for London, before moving to the Special Crime and Counter Terrorism Division as Head of Special Crime, then to CPS South East as Chief Crown Prosecutor.

Frank has led national projects, such as the implementation of the Speaking to Witnesses at Court Guidance and is national lead for immigration crime.

Hannah von Dadelszen is dual qualified as a solicitor in England and Wales and barrister and solicitor of the High Court of New Zealand.

Hannah started her career at one of New Zealand’s top commercial law firms before moving to the UK in 2002.

Before joining CPS in January 2021 Hannah worked for the Serious Fraud Office (SFO) for 14 years, latterly in a variety of senior roles including Joint Head of Fraud and Head of the Strategy and Policy division. During her time at the SFO Hannah dealt with the full range of complex cases ranging from the libor prosecutions, the Barclays prosecution and the Rolls Royce and Serco deferred prosecution agreements. She has appeared before the House of Lords select committee to give evidence on the effectiveness of the Bribery Act 2010.

Prior to joining the East of England Area, Hannah was a Deputy Chief Crown Prosecutor at CPS Headquarters.

Hannah has responsibility for the Magistrates' Court Units and the Complex Casework Unit.

Robin Weyell has been a lawyer within government for over 20 years working primarily in investigatory and covert law within the fields of counter narcotics, organised crime and police complaints/corruption.

Susan joined the CPS in 1986 and worked across a range of roles including finance, personnel and accommodation within the London North Area. In 1992 Susan moved to the HQ Directorate in CPS Headquarters working within specialist fields including pay strategy and negotiations, appraisal, policy and operations.

In 2003, Susan joined the East of England Area and is now the Area Business Manager with responsibilities for both strategic and operational performance.

The Crown Court Unit deals with cases such as murder, robbery, serious assaults, dwelling house burglaries, complex fraud, the supply and trafficking of drugs, and the most serious road traffic offences - especially those that result in a fatality.

The Complex Casework Unit (CCU) is responsible for the largest and most complex cases in the Area. Its casework typically arises from serious and organised crime which is often cross border, particularly drugs importation and distribution, money laundering and modern slavery. The CCU also undertakes large scale child abuse cases, complex homicide and fraud.

The Rape and Serious Sexual Offences Unit is a dedicated and specialised team which prosecutes cases such as rape, serious sexual offences, child abuse and child sexual exploitation. The staff on the unit all have a great deal of understanding of the sensitivities of prosecuting cases of this nature and how difficult and harrowing it can be for a complainant from the first step of making a complaint to the police, through to giving evidence in a trial.

A former Detective Superintendent jailed for possession of extreme pornography

We welcome feedback about the service we provide. It is an important part of helping us to continue to improve what we do and how we do it. We have two Local Scrutiny and Involvement Panels (LSIPs) with representatives from each of the four counties in the East of England Area. The community representatives look at our work and policies and give us their views and ideas on how we can do things better. The panel meetings also give us an opportunity to explain the work that we do to those representatives of our local communities.

One LSIP is responsible for looking at Hate Crime and one for looking at Violence Against Women and girls (VAWG). Each LSIP has an important role in helping us to improve how we prosecute cases and the services we provide to victims and witnesses. The LSIP is made up of volunteers who act as our 'critical friends'.

We ask the panel what we're doing well, what we can do better and ask for their comments and ideas of how we can improve our work. We consult them about how we can increase confidence within our local communities.

It is a two-way process. The panel members tell us about any areas of concern that local people have about crime and criminal justice and we explain about specific aspects of the work that we do. The aim is for local communities to have more of an understanding of what we do and more of a say in what we do.

We are committed to dealing with Victims and Witnesses with respect. We understand being a victim and or witness of crime can be difficult and are sensitive to how vulnerable some may feel due to their experiences. We will ensure that they are dealt with in a professional and courteous manner. We will listen to their needs and support them through the process so that they can give their best evidence at court.

CPS East of England is committed to ensuring that we are renowned for our professionalism, and that we are delivering justice to all members of our communities. We want communities to continue to have confidence in their local justice system, to believe their interests are fairly represented and justice is seen to be done.

If you are a victim seeking to exercise your right to request a review of a CPS decision not to bring charges, discontinue proceedings or offer no evidence in a case please go to our Victims' Right to Review page.

Area email address for members of the public: EastofEngland.Inbox@cps.gov.uk

Please note that these .cjsm.net email addresses are not accessible to the public - they are secure addresses for use in the criminal justice system.