Someone can be a victim of more than one type of hate crime.

Our own performance data and bespoke sampling exercises help us to understand how we are responding to the challenges of hate crime prosecution. In addition, we make use of external research and reports from academics, parliament, the government and community stakeholder organisations to improve our understanding and awareness of hate crime, how it operates and its impact. The sections below provide a outline of some of the relevant work that we have taken account of in recent years.

Our approach to dealing with CAOP has much in common with the monitored strands of hate crime. There can also be links from a crime against an older person to one or more of these strands. For these reasons, we include the CAOP policy and guidance here.

How to report hate crime

In addition, you can report hate crime to some of the organisations who support affected communities, including:

We ran a social media campaign called #HateCrimeMatters to help people understand what hate crime is, and what can be done about it.

How the CPS defines hate crime 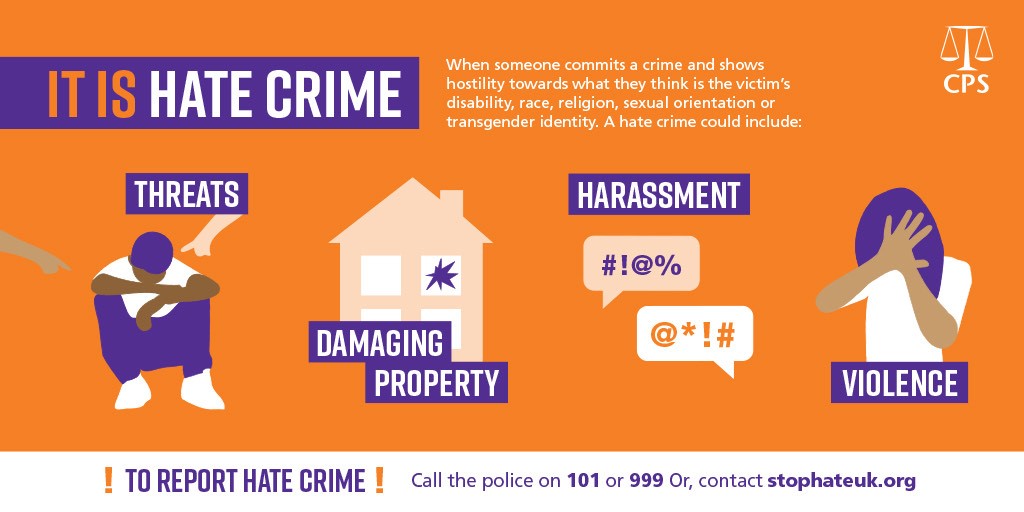 In England and Wales the monitored strands of hate crime are:

These strands are covered by legislation (sections 28-32 of the Crime and Disorder Act 1998 and sections 145 and 146 of the Criminal Justice Act 2003) which allows prosecutors to apply for an uplift in sentence for those convicted of a hate crime.

The police and the CPS have agreed the following definition for identifying and flagging hate crimes:

There is no legal definition of hostility so we use the everyday understanding of the word which includes ill-will, spite, contempt, prejudice, unfriendliness, antagonism, resentment and dislike.

How the CPS deals with hate crime 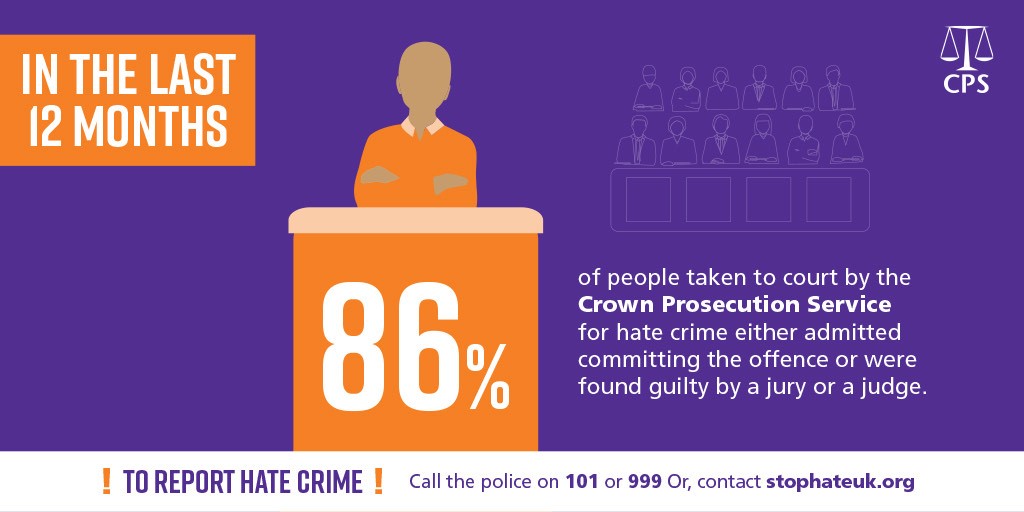 Once a hate crime has been reported, the police investigate whether a hate crime has been committed. They refer cases to the CPS to decide whether there should be a charge. We are responsible for preparing and presenting hate crime cases at court and applying for an increased sentence. We need enough evidence to convince the court that the crime was motivated by or demonstrated hostility.  We also work with Witness Care Units to provide information, assistance and support to victims and prosecution witnesses.

In 2020-21, 86% of hate crimes cases we prosecuted led to a conviction or guilty plea. Because of the serious nature of these offences, the CPS can apply to the courts for a 'sentence uplift' which is an increased punishment for the crime. Last year, more than half of our requests led to offenders having their sentence increased because it was motivated by hate.

Our public policy statements explain the way we deal with and prosecute hate crimes and what victims and witnesses can expect from us.

We have leaflets explaining about hate crime:

We have also published more information about how we prosecute Disability Hate Crime in Easy Read format:

Find the quarterly summary you're interested in and select 'Hate Crime' in the index.

You can find earlier data (to 2018-2019) about Hate Crime prosecutions in the Underlying Data section of this website.

Context and characteristics of hate crime

We are proactive in seeking feedback and information to support more effective prosecution of hate crime. This includes the nature of offending and its impact, awareness and understanding amongst communities concerned and our effectiveness in response. In supporting this, we work closely with community-focused organisations, criminal justice partners and others.

Support for victims and witnesses

Hate crime - What it is and what to do about it - This is a short guide about hate crime; what it is, what you can do about it and who can help.

Hate crime: what it is and how to support victims and witnesses - This guide is about hate crime and how to help those who may be victims of this kind of offending behaviour. It is designed for people working in voluntary organisations, as well as frontline staff in health, housing or social welfare – in fact anyone who might be the first to hear about an incident.

There is a wide range of organisations who support victims and witnesses of hate crime. You can find out more about some of these organisations on their websites.

Further information for victims and witnesses

Hate crime
@cpsuk
Tune in to @itvwestcountry at 6pm to hear how Mohammed Zamani was convicted for the rape and attempted rape of two… https://t.co/xf3BTbduyS
RT @MaxHillQC: Treasury Counsel work is probably the most challenging and rewarding at the criminal Bar; and it will be available to a wide…
RT @CPSCareers: Today we’re launching our new Treasury Counsel Pathway – a positive action initiative to support increased diversity at the…
RT @CPS_NorthWest: ⚖️Often victims feel isolated from the Criminal Justice process, but it is your right under the Victim’s Code to have yo…
⚖️ Six men have been convicted of killing a man in a violent attack following a dangerous car chase through the str… https://t.co/FETmi2lw32
Navigate to tweet 0Navigate to tweet 1Navigate to tweet 2Navigate to tweet 3Navigate to tweet 4
Scroll to top
Close