CPS East Midlands is currently maintaining core business functions, while doing all we can to minimise in-person contact.

Our main contact numbers are 0115 852 3300 (Nottinghamshire, Derbyshire and Lincolnshire) and 0116 204 6700 (Leicestershire and Northamptonshire) with options for the various units.

All email should be addressed in the first instance to: EMcorrespondence@cps.gov.uk 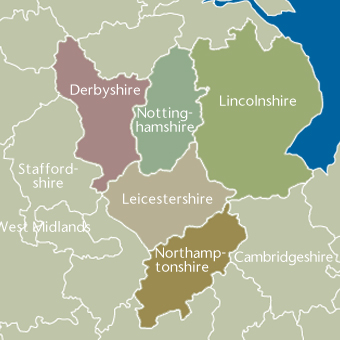 The CPS has 14 Areas/Regions across England and Wales - the CPS East Midlands Region serves the counties of Derbyshire, Leicestershire, Lincolnshire, Northamptonshire and Nottinghamshire, including the cities of Nottingham, Derby and Leicester and the county of Rutland.

The Area is supported by a Business Centre - a team of specialists in the fields of performance, finance, human resources, communications and inclusion.

Janine was admitted as a solicitor in 1989 following articles in Leicester. After a year in private practice Janine joined Nottinghamshire CPS as a Crown Prosecutor in January 1991 and two years later became a Senior Crown Prosecutor.

Janine moved to Derbyshire as Senior District Crown Prosecutor and became SDCP for the Magistrates’ Court in 2012. Appointed Deputy CCP in July 2013, she was also champion for hate crime, victims and custody time limits.

She became Chief Crown Prosecutor for the Area in October 2015. She is also the national CCP lead for road traffic offences.

Karen has built her career in the CPS starting out as an administrator when the CPS was first established in 1986. She qualified as a solicitor in the early 1990s and has moved around the East Midlands in different management roles, including managing the team serving Lincolnshire.

In November 2013, she set up and led a Proceeds of Crime team at the request of the Chief Executive and has led the Area’s work in relation to the abolition of committals, the implementation of Better Case Management and the Crown Court standard operating practices. She has been the Area legal lead, custody time limits champion, violence against women and girls lead and led the systems and processes work streams during the Area restructure for the Crown Court.

She became temporary Deputy Chief Crown Prosecutor in 2015 and took on leadership of the Magistrates Court in May 2017.

Andrew joined the management team at CPS East Midlands in June 2017. He has held senior management positions for a number of years before that. In his early CPS career, he was a Crown Advocate.

He moved to CPS South West as DCCP to lead the Magistrates Court team in 2016, before being appointed to the East Midlands.

Adele joined the CPS in 1987, after working for the Finance and Rates Department of Chesterfield Borough Council. During her CPS career she has held various specialist roles, including finance and estates management. She has been an Area Business Manager since 1999, in Derbyshire and Northumbria.

She joined the East Midlands in 2007. She was the national lead for a review of our business centres.

The Complex Casework Unit prosecutes cases that are particularly sensitive or high profile. They tackle the Area’s most serious and complex crimes and criminality that spans across borders. The unit enables CPS East Midlands to deal with complex cases more effectively by employing experienced lawyers, paralegals and administrators in one team, so that these cases can have the most appropriate resources allocated to them.

The team’s caseload includes serious organised crime; historical cases, complex frauds and cases that are particularly sensitive to their local communities. Prosecutors work very closely with more specialist police departments and are able to become involved with investigations early on.

The Rape and Serious Sexual Offences Unit is a dedicated and specialised team who prosecutes cases such as rape, serious sexual offences, child abuse and child sexual exploitation.

CPS East Midlands continues to engage with the diverse communities that we serve in order to ensure that we make this region a safer place to live, work and visit. We are committed to listening to members of the public and involving people in the community in improving the way we work.

We provide a service to members of the public in the East Midlands, so the community is at the very heart of what we do. We have well-established scrutiny and community involvement panels to help us with our work on hate crimes and violence against women and girls and to establish a dialogue with the public.

With effect from 3 June 2019, all casework correspondence from defence and courts should be sent to emcorrespondence@cps.gov.uk. A central unit will deal with the correspondence or allocate it to the right person.

To help us deal more quickly with correspondence, please include in the subject field: URN, Defendant surname,court type (MC or CC) and date of hearing. For example: 31ZZ1234519 Bloggs MC 25 12 19. We will still deal with your correspondence if it does not follow this pattern, but it will take longer to identify the case and respond.

Correspondence email addresses in use before 3 June should no longer be used.

The only exception is for requests for IDPC for hearings on the same day. These requests should be sent to eastmids.today@cps.gov.uk. Please note: Requests for anything other than same day IDPC will be discarded and not actioned. This address is to ensure prompt responses for this information.

We are committed to dealing with Victims and Witnesses with respect. We understand being a victim and or witness of crime can be difficult and we are sensitive to how vulnerable some may feel due to their experiences.

CPS East Midlands is committed to ensuring that we are renowned for our professionalism, and that we are delivering justice to all members of our communities. We want communities to continue to have confidence in their local justice system, to believe their interests are fairly represented and justice is seen to be done.

Area email address for members of the public – em.businesscentre@cps.gov.uk

@cpsuk
⚖️ A fraudster who used Grindr to meet men for casual sex before robbing and blackmailing them for money has been j… https://t.co/zurB9v3Bys
⚖️ Two men have been imprisoned for their part in defrauding millions of pounds from over 100 victims. Read more… https://t.co/pwqQ9aDCZQ
RT @CPS_NorthWest: ⚖️Andrew Cairns guilty of causing death of 11yr old Ruby Cropper in Aug 2020 in Radcliffe. After he collided with her, h…
We have published the latest round-up of quarterly statistics on prosecutions. This Q2 data release covers the 3-m… https://t.co/chWD9Pdxb3
RT @CPS_Mersey: A teenager has been found guilty of murdering a man with a "Rambo"-style knife in an incident in Cheshire. The youth, who c…
Navigate to tweet 0Navigate to tweet 1Navigate to tweet 2Navigate to tweet 3Navigate to tweet 4
Scroll to top
Close