Victims' Guide - What you need to know first 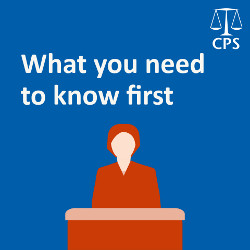 The Victims' Code published by the Ministry of Justice explains the minimum standard of support that criminal justice agencies must provide to victims.

This can be summarised as 12 victims’ rights:

This guide is designed to help us meet your rights by helping you to understand them and by providing information about what you can expect at each stage of the criminal justice process.

When you report crime to the police they will carry out an investigation. This means that they’ll look for all the evidence they can to understand what happened.

The police will record your description of what happened - this is called your witness statement. As part of their investigation they will also take statements from anyone who saw what happened or who can provide information to help the investigation.

The police will also interview anyone who is suspected of committing the crime - this could be someone you’ve named or someone the police suspect for another reason. Suspects will be interviewed ‘under caution’ this means that they don’t have to answer police questions but that anything they say can be used as evidence in the case.

If the police need to collect evidence from your devices like your mobile phone or your laptop they’ll ask for your agreement to do this. You can read more about this in our section on using digital evidence.

For less serious offences, for example shoplifting or some offences which have a maximum sentence of 6 months (or less) in prison, the police will decide if there is enough evidence to charge a suspect.

If it’s appropriate for a less serious offence, the police may decide to deal with the offence with what’s called an ‘out of court disposal.’

This means that the offender won’t be formally prosecuted but the details of the investigation will remain on their record and they may be given a caution.

If the police decide a prosecution is needed for this type of offence then they will charge the suspect and send the case to us at the CPS.

Prosecutions for these types of offences must be started within six months of the date that the offence happened. This means that we can’t prosecute someone for a less serious offence if they haven’t been charged within six months.

For more serious offences, such as hate crime, domestic abuse or any offences which carry a sentence of more than 6 months in prison, the police will send the case to us at the CPS without making a charging decision. A CPS prosecutor will then decide whether a suspect can be charged and prosecuted.

If the police don’t think that they have enough evidence they won’t pass the case to us and the suspect won’t be charged with an offence.

If that happens your police contact will explain why, what support is available to help you and whether there are any other steps they can take against the suspect.

If the police decide not to send your case to us, you can ask the police to review that decision - this is called a Victim’s Right to Review. Your police contact can let you know how to do this.

Once the police consider that they have enough evidence they will pass the case to us at the CPS.

For less serious offences, for example shoplifting, the police will already have decided to charge the suspect before they send the case to us.

In these cases we’ll review the evidence to check that we agree with the police’s decision before we go ahead with a prosecution. If we decide there isn’t enough evidence to prosecute we’ll let you know the reason for our decision. You can read more about this and your right to review in our section on making our decisions.

For more serious offences, such as hate crime, domestic abuse or any offences which carry a sentence of more than six months in prison, we will review the evidence the police have collected and decide whether or not we can prosecute the suspect.

We make our decisions by applying the two-stage test set out in our Code for Crown Prosecutors. You can read more about this in the section on making our decision.

In some more complicated cases we can offer the police ‘early advice’. This means that, if they ask for our advice, we’ll work with them as early as possible to advise them on what kind of evidence to look for to help them build the case. Working together helps us to build strong cases as quickly and effectively as possible.

We don’t investigate crimes and we can’t review a case if it isn’t sent to us by the police.

You have the right under the Victims’ Code to be provided with information about the investigation and prosecution. The police will keep you informed with what’s happening in your case at each stage – including if or when you may need to attend court.

The police will keep you informed with what’s happening in your case at each stage – including if or when you may need to attend court.

The police will assign an officer to your case as your point of contact when you report the incident – this person might be referred to the Officer in Charge or ‘OIC’ for short. They will discuss with you how and when they will be in touch so you can agree what works for you. They’ll also tell you how to get in contact with them if you have questions at any point.

You usually won’t speak to someone from the CPS in the early stages of your case – we normally only meet with victims at court or in circumstances where we’ve had to change the charges or stop the case. We’ll still be working on your case so you can let the police know if you have any questions for the prosecutor. 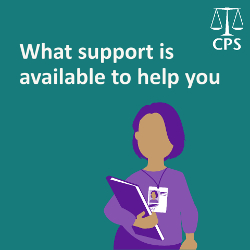 What support is available to help you