Victims' Guide - After the trial: appeals 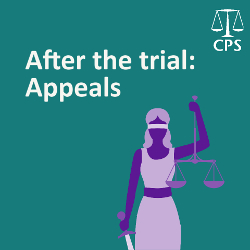 You have the right under the Victims’ Code to be given information about any appeals in the case. Your police contact will let you know if there are any appeals.

If the defendant has been found ‘not guilty,’ we can’t appeal the verdict. This is because the law does not give us the right to appeal against the decision of the jury.

In very rare circumstances, it may be possible for us to ask the court to quash the acquittal and ask for a retrial if the police find ‘new and compelling’ evidence which was not available at the time of the original trial. However, these cases are extremely rare as the standard of evidence needed to order a retrial is very high.

If the defendant is found ‘guilty,’ they can appeal against their conviction – this means they are asking for it to be overturned because they don’t believe they should have been found ‘guilty’.

They can also appeal against the severity of their sentence. This means they aren’t challenging the fact that they’ve been found ‘guilty’ but that they believe the punishment they’ve been given is too harsh.

Defendants who have been convicted after a trial in the magistrates, court have an automatic right to an appeal, should they wish to do so.

If a defendant appeals, the case will be heard again by a judge and a panel of magistrates in the Crown Court. Sometimes this will mean you will be asked to give evidence again. If this happens the police will explain this to you.

The police will let you know if the defendant has made an appeal and keep you up-to-date with the details of any hearings.

To make an appeal after a trial in the Crown Court a defendant needs to have ‘grounds’ for appeal. This means they have to have a legal reason why they think the verdict is wrong. For example, if they say that the judge did not conduct the trial in a fair way or made legal mistakes.  If a defendant wants to appeal, a judge from the Court of Appeal needs to agree that they have ‘grounds’ to appeal.

You can read more about appealing unreasonably low sentences on the Attorney General’s website.