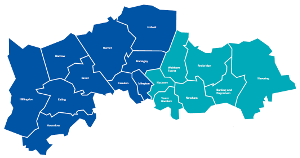 The CPS has 14 Areas across England and Wales and CPS London North Area is one of two Areas in the Greater London Area (CPS London South being the other). It covers most of the London boroughs north of the River Thames (excluding Hammersmith & Fulham, Kensington & Chelsea and Westminster). We prosecute cases investigated by the Metropolitan Police in these boroughs.

We currently employ approximately 450 members of staff which consists of lawyers, paralegals and administrators. Our teams are based in offices near Victoria. We also have a small number of remote staff based in CPS offices in Cardiff. 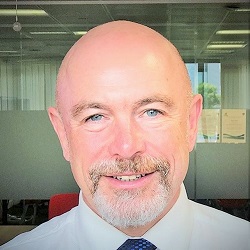 In 2004 he was appointed Chief Crown Prosecutor for CPS Direct and set up the CPS service which provides charging advice outside normal working hours across England and Wales.

Jo is the Deputy Chief Crown Prosecutor (DCCP) responsible for Crown Court cases in London North. She joined the CPS in 2001 as a Senior Crown Prosecutor (SCP) in Thames Valley. Prior to that she was a defence solicitor in private practice for seven years.

Having worked as an SCP, Jo was appointed a District Crown Prosecutor (DCP) in 2003 and undertook a number of DCP roles over the Magistrates’ and Crown Court teams across Thames Valley and then Thames and Chiltern, following the restructure of CPS Areas.

Jo had a period as acting Senior DCP heading the Complex Casework Unit (CCU) in Thames Valley in 2010. She also undertook a role as project manager for rolling out digital working in Thames and Chiltern in 2012.

In July 2019, Lisa started in London North as Deputy Chief Crown Prosecutor for the CPS London North Magistrates’ Unit. She took over as DCCP for the RASSO team and the pan-London Homicide Team in August 2020.

Our Magistrates’ Court Unit prosecutes offences of domestic abuse, assaults, criminal damage, minor public disorder incidents, all but the most serious traffic offences, possession of drugs, dangerous dog offences, offences of dishonesty and commercial burglaries. The list is not exhaustive but generally comprises of any offence where the maximum permitted sentence for each offence does not exceed six months imprisonment or one year if two or more relevant offences are to be considered.

The Crown Court Unit deals with cases such as attempted murder, robberies, serious assaults, dwelling house burglaries, complex fraud and the supply and trafficking of drugs.

The RASSO Unit is a dedicated and specialised team which prosecutes cases such as rape, serious sexual offences, child abuse, child sexual exploitation, honour based violence and Female Genital Mutilation. The staff on the unit all have a great deal of understanding of the sensitivities of prosecuting cases of this nature and how difficult and harrowing it can be for a victim from the first step of making a complaint to the police, through to giving evidence in a trial.

CPS London North continues to engage with the diverse communities that we serve in order to ensure that we make this region a safer place to live, work and visit.

We acknowledge that public trust is measured against our ability to work with members of our local communities in key areas. To this end we have two community panels that work on a pan-London basis – one that focusses specifically on Violence Against Women and Girls (VAWG) and one that has a wider remit and will for instance look at cases involving hate crime.

Our aim is to inform, listen, work with and in turn, be informed by those living and working across north London.

Want to keep up with our work in London North?

Each month, CPS London North publishes an e-newsletter with important updates on our work. If you would like to subscribe to this newsletter, please subscribe below.

Man jailed for killing brother and sister 29 years ago

Man pleads guilty to murder and sexual assault of woman

If you are a victim seeking to exercise your right to request a review of a CPS decision not to bring charges, discontinue proceedings or offer no evidence in a case please read more about the Victims' Right to Review.

Please use the email addresses below or for Digital IDPC please email: London.IDPCRequests@cps.gov.uk.cjsm.net