Three south west police forces have committed to a joint three year action plan with the Crown Prosecution Service (CPS) Wessex, to improve outcomes for all victims of domestic abuse.

While Wiltshire, Hampshire and Dorset Police have all been working on improvements since 2019, the step change is the adoption of an end-to-end approach with the Criminal Justice Process at its core.

The collective aim of the police and CPS Wessex is to increase public confidence in reporting domestic abuse by removing sticking points at every stage in the process. This starts with the initial response and investigation of reports, through building strong cases and seeing them over the line,  bringing offenders to justice or into programmes that reduce re-offending.

Above all, police and CPS Wessex will support victims at every stage of the process in order to reduce the disparity between the number of reports received and those going to court.

Kate Anderson, CPS Wessex Deputy Chief Crown Prosecutor, said: “Tackling domestic abuse through effective investigation and prosecution is a top priority for the police and CPS Wessex. Collectively, we want to make sure victims have the confidence to come forward and report their experiences, safe in the knowledge that our agencies will do everything they can, both to support them and to pursue the abuser.

“We recognise the devastating impact of domestic abuse on the course of a victim’s life, their experiences and their future and we want those affected to be able to access justice. It is central to the aim of this joint action plan that we will prioritise these investigations and prosecutions to bring more offenders to justice, and to help protect victims and local communities from further harm.”

Nationally, there are 2.4 million victims of domestic abuse a year. The action plan aims to leave no one behind, recognising the harm that an environment of domestic abuse can also do to children and the wider families of victims and perpetrators.

The action plan will be measured against indicators such as arrest rates, charge and conviction rates, and the use of protection orders. An important part is the reduction in cases which do not progress due to evidential difficulties or because the victim does not wish to proceed.

ACC Mark Cooper, Wiltshire Police: “We know that arresting perpetrators is only part of the picture - prevention is always better than cure.

“We also recognise more needs to be done at the legal end, ensuring, once someone reports abuse, we pursue an arrest, are thorough with our investigative work to build enough evidence to secure a prosecution, support the victim through the Criminal Justice System and ultimately get a conviction. This is the only way we can build on what is already an improving service to victims and our communities, and that’s where our continued work with our colleagues at CPS Wessex and the police forces in this region comes in.

"Wessex Tri-Force works together to build effective local partnerships to improve our joint response to domestic abuse for all, including violence against women and girls in our local communities.”

The last two years have seen an unprecedented situation caused by the increased isolation of victims due to the pandemic, and also to the shocking spotlight that has fallen on violence against women and girls (VAWG). This Action Plan takes into account the government’s approach to VAWG and while all victims of domestic abuse will be helped by the improvements being worked on by the police and CPS Wessex, it does not lose sight of the stark truth that women are disproportionately affected by domestic abuse.

ACC Craig Dibdin, Hampshire Constabulary: “We are committed to improving our knowledge and awareness of domestic abuse across the force to ensure we can provide the best service and support to our communities. During the worldwide 16 days of Action campaign we have been promoting help and resources available for victims of domestic abuse and perpetrators from the police, CPS and other criminal justice partners across Hampshire and the Isle of Wight.

“Officers have run community events with our partners to raise awareness of domestic abuse, coercive and controlling behaviour and stalking to encourage victims to report these crimes.

“Of course, identifying offenders and protecting those who need our help will not stop after the 16 Days of Action and we will continue to prioritise perpetrators of violence towards women. The Tri-Force DA Strategy demonstrates 365 days of action every year, working with partners as we recognise that major societal and cultural changes like this requires not just the police, but support across all sectors.

ACC Steve Lyne, Dorset Police, said: “Dorset Police has pursued a commitment to improving outcomes for all victims of domestic abuse for some time now, with extensive training, in particular in partnership with Safelives, for officers and staff. Now, working together with the CPS and fellow police forces, we are pleased to commit to the Tri Force action plan to make further improvements. The fundamental approach of putting victims at the heart of what we do and relentless pursuit of perpetrators from end-to-end within the Criminal Justice System will contribute greatly to safeguarding more victims and bringing more perpetrators to justice.

“Where the police bringing offenders to justice in order to keep victims safe is a key part to our response, the overall solution requires a broader joint approach. This Action Plan covers the use of protections orders and the diversion of perpetrators into programmes to help prevent re-offending, and so prevention as well as cure is also a key element. Ultimately, it is a prime opportunity to reduce the disparity between reported domestic abuse and those cases that make it to court or other positive outcomes.”

Recently all three forces promoted domestic abuse awareness, through 16 Days of Action which, under a variety of names, took place around the globe. Some examples are attached. However policing of domestic abuse does not end with 16 Days and Wiltshire, Hampshire and Dorset police forces and CPS Wessex will continue to work together to deliver the three year action plan, and beyond, to safeguard all victims of domestic abuse.

The Tri-Force Action Plan on Domestic Abuse is supported by the Police and Crime Commissioners of Wiltshire, Dorset, and Hampshire and the Isle of Wight, who have all committed to reducing violence against women and girls and to improving outcomes for victims of domestic abuse and other crimes in their respective force areas.

Police and Crime Commissioner for Hampshire and the Isle of Wight Donna Jones said, “Domestic Abuse and violence in the home is an epidemic. It affects children as well as adults and the effects are devastating and lasting. Families are being torn apart, whilst living under the same roof.

“As the national lead for Victims I am committed to driving change through the public sector to prevent domestic abuse and stop the harm. No one public service can do this on their own and of one thing I am certain, the police cannot arrest their way out of this issue. Midwifes, health visitors, GPs, teachers, neighbours, employers, we all need to be looking out for the signs and helping to reduce trauma in the home including adverse childhood experiences.

“This is how Britain will end the epidemic of domestic abuse and save the next generation.”

David Sidwick, Police and Crime Commissioner for Dorset said: “This collaboration between the three police forces and the Crown Prosecution Service fits well with my vision for more effective joined-up ways of working in future policing. This shared determination will ensure both victims and perpetrators of domestic abuse are better served, protected, and supported by the criminal justice system.

"This joined up way of working fits well with my ambition and the priorities set out in my Police & Crime Plan. I am determined to work even more effectively with Policing colleagues, to design, develop and deliver better victim focused police services for those at greatest risk. I am extremely pleased to support this joint commitment to better safeguard and support victims of violent crime at each stage of the criminal justice process.

"Collaborations of this type are important for future policing as police forces alone do not have the resources to effectively tackle and prevent these hideous crimes, however when they combine their capabilities and specialisms with equally committed and hard-working strategic partners, I believe they can help make very real change and improvement happen.”

Wiltshire’s Police and Crime Commissioner Philip Wilkinson said: "We know that many victims of domestic abuse continue to suffer in silence, and that the reports Wiltshire Police receive represent only a fraction of the real picture.

"My new Police and Crime Plan will outline how my office and Wiltshire Police plan to bridge that gap between reported crime and the reality of what is happening in our communities.

"We all need to be more vigilant, step up and support those trapped be that personally or professionally. Domestic abuse can take many forms including violence, coercive control and harassment and stalking.

"We mustn't shy away from asking the difficult questions. It's also important to stress that victims of domestic abuse are able to access specialist support, without having to report to the police, and if you're worried about a colleague, friend or loved one you are able to seek advice on their behalf." 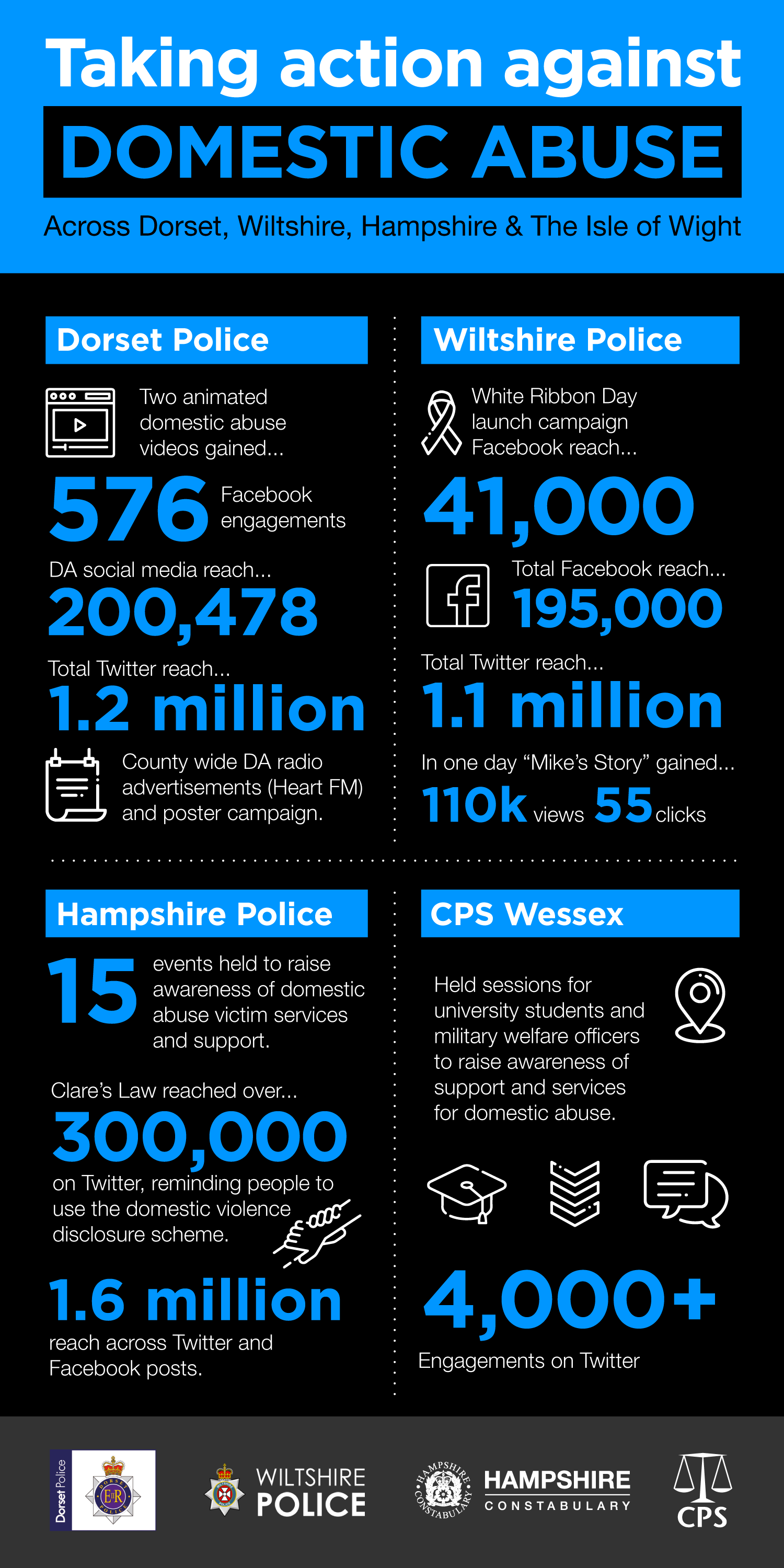 Domestic abuse
Domestic abuse, or domestic violence, is defined as any incident of controlling, coercive or threatening behaviour, violence or abuse between those aged 16 or over who are or have been intimate partners or family members, regardless of their gender or sexuality.
Continue reading Domestic abuse

Violence against Women and Girls Guidance

Domestic abuse, Violent crime
@cpsuk
RT @CPS_NorthWest: ⚖️Kamran Aziz jailed 16mths & disqualified from driving for 3yrs, 8mths for dangerous driving whilst under the influence…
⚽ "Great result - racist is banned from matches for 3 years after racial slur at game. Last week another person got… https://t.co/83TJ1Eq26y
#Stalking is among the most complex offences we prosecute, frequently involving victims who have faced harrowing ex… https://t.co/wdgZl94E9k
RT @CPS_NorthWest: ⚖️Today our work experience @salfordbizsch law students from @SalfordUni will be looking at hate crime. They will lear…
RT @CPSEastMids: ⚖️JAILED: A supermarket security guard from Bulwell in Nottingham has been sentenced to life for murdering his ex partner…
Navigate to tweet 0Navigate to tweet 1Navigate to tweet 2Navigate to tweet 3Navigate to tweet 4
Scroll to top
Close