18 year old from Southsea sentenced for offences against police officers

Knight, from Southsea, had been detained and arrested by Hampshire Constabulary police officers on 22 September 2019 when he became increasingly aggressive. He spat at officers and used racist words whilst being transferred to a police van.

Knight was sentenced for numerous offences, including two charges of assaulting emergency workers, a racially aggravated public order offence, assault and theft. In total he was sentenced to eight weeks' imprisonment, suspended for 12 months. He was also given a 12-month Community Order, ordered to complete 25 days of rehabilitation activity requirements, and must pay compensation to his victims in the sum of £188.

The sentence for using racist language was increased from a community order to a suspended term of imprisonment.

Kate Anderson, Deputy Chief Crown Prosecutor and Hate Crime Lead for CPS Wessex, says: “We are committed to prosecuting hate crimes and seeking a sentence uplift from the court, meaning that the offender will receive an increased term. As this is Hate Crime Awareness Week, we want there to be no doubt that the CPS will seek to secure increased sentences from the court for perpetrators of hate crime. In this case the term was increased from a community order to a suspended prison sentence. This prosecution demonstrates that hate crime will not be tolerated.” 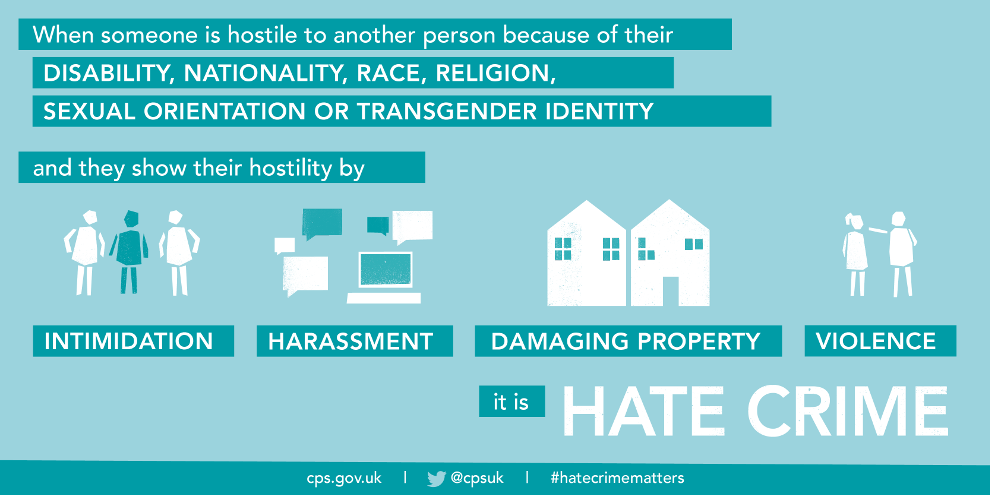 CPS Wessex assures public that hate crime is a priority

Policy guidance on the prosecution of crimes against older people