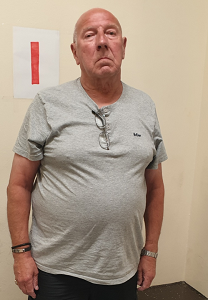 A 71-year-old man has been jailed for trying to lure away children in city centre shops for sexual purposes.

On 20 August 2021, he approached a 10-year-old child in Wilkinson’s and asked her if she wanted a kiss. He did not get close to her but she was immediately nervous and upset and told her mother and sister what had happened.

On 25 September 2021 he entered the Home Bargains store and approached a 3-year-old child, sexually assaulting her. She told her older sister who immediately told a parent. As a result, staff were able to check CCTV which verified what the 3 year old had said.

Half an hour later on the same day, he approached another child, who was 8-years-old and asked her to come and play with him. The Crown Prosecution Service’s case was that, had the child gone with him, he would have committed a sexual act with her.

Leslie Foster was traced by police and arrested. He was charged with two offences of causing or inciting a child to engage in sexual activity, one count of attempting to abduct a child and one offence of committing an offence with the intent to commit a sexual offence.

He has been placed on the Sexual Offenders Register. The Crown Prosecution Service also applied for a Sexual Harm Prevention Order to be imposed. This was granted indefinitely by the court.

“The Crown Prosecution Service’s case was that he was trying to lure these very young girls away for sexual purposes.

“We believe that, had these children gone with him, he would have committed a sexual act on them.

“However, instinct is very powerful, and these children immediately knew that what was happening to them wasn’t right.

“Without the instinctive reactions of these children, Foster’s offending could have had far more serious consequences.

“The Crown Prosecution Service would like to pay tribute to the actions of the victims and their families at the time and for their help in building this case.

“We hope the relatively speedy conclusion of this prosecution helps them to move on with their lives.”

Man jailed for a series of serious sexual offences

Could clearing the public gallery help the victim to give their best evidence at court?