Five London drug dealers have been sentenced to a total of 36 years' imprisonment for running a ‘county lines’ network.

County lines drug rings involve drug dealers from cities who look for new markets in other parts of the country. In order to operate they use violence and intimidation and do their best to generate more profit by creating new addicts. 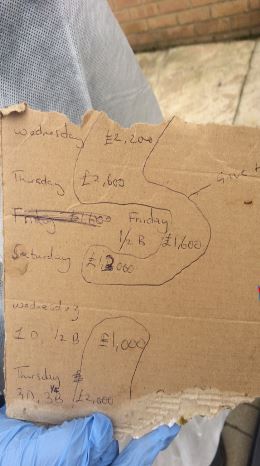 The Hackney-based dealers marketed and sold the class A drugs in Peterborough and Huntingdon using dedicated mobile phone aliases ‘Ricki’ and ‘TJ’.

Five people were sentenced for conspiracy to supply class A drugs at Wood Green Crown Court on Friday (20 September). Four admitted their roles and one was found guilty after trial.

They had listed the financial value of heroin and crack cocaine they had sold on a piece of cardboard and threw it in a bin outside the house they were using in Peterborough (left).

Jodeci Ofulue, 24, was the first person arrested after he was seen leaving a Peterborough property in November 2017 and approaching an abandoned vehicle. When police attempted to stop him he ran away, dropping car keys and the mobile phone which controlled the ‘Ricki’ drugs line. Police found £13,370 worth of crack cocaine and heroin, scales and used latex gloves in a bag in the car. He later pleaded guilty and was jailed for six years and nine months.

Rashayne Hunter, 20, convicted after trial, was a frequent visitor to the Peterborough address before November 2 and was seen with other co-conspirators. He was jailed for 10-and-a-half years.

Sherif Isiaka, 19, helped organise ‘reloads’ - fresh supplies of heroin to be delivered to the address in Huntingdon. He was jailed for six years and 11 months plus seven months for a separate offence of possession of crack cocaine with intent to supply after he was stopped by police with 101 wraps in Braintree, Essex on 24 March 2018. 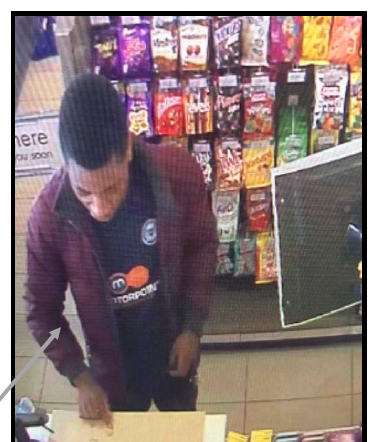 Samuel Ayowera, 19, was linked to the conspiracy partly through his role ‘topping up’ mobile phone credit for one of the drug lines (left). He was jailed for seven-and-a-half years.

A 17-year-old ‘street-dealer’ was found with 286 wraps of crack cocaine and heroin in his trouser pockets worth around £3,000 when police raided a home in Huntingdon in November 2017. He was jailed for four years and four months.

Elaine Cousins from the CPS said: “This London ‘county lines’ gang operated a lucrative drug-dealing network in two towns outside the capital.

“The leaders of the conspiracy made attempts to keep the dealing at arms’ length in order to protect themselves from detection.

“However the prosecution was able to link each of the gang members to the dealing through careful analysis of the telephone evidence, police surveillance and the proceeds of crime they had but which they could not explain.”

More than 20 drug dealers prosecuted after complaints from residents